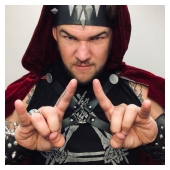 Durbin’s signature vocal prowess and powerful stage presence have earned him stamps of approval and praise from rock and metal royalty like Steven Tyler, Sammy Hagar, Rob Halford, and more. He has four full length albums to his name, in addition to lending his voice to a handful of various albums. James Durbin is an artist on the rise and a performer you don't want to miss. Expect his debut record "The Beast Awakens" under the name "Durbin" on February 12th, 2021.